The Tour de la Dent du Ratier is a hiking itinerary in the Queyras Regional Nature Park. Less well known than the GR58, this hike takes you exploring an exceptional land from a different angle. Dent du Ratier is one of the valley’s remarkable peaks and a landmark that will guide you throughout the itinerary. The red and yellow waymarkers will lead you into the heart of these beautiful mountain pastures and reveal the typical local architecture.

Stages of the route

see the map
Your first day of walking starts at Arvieux village in the heart of the Azur valley. This is your chance for a closer look at Dent du Ratier, after climbing through a forest of pines and larches. At the Furfande pass (2,546m), you’ll be overlooking one of the region’s most beautiful mountain pastures: Furfande and its one hundred chalets. This is where your hike ends with a stunning view of the surrounding peaks. Look carefully and, in the distance, you may well spot some of the chamois that live here all year round.
For further information

see the map
This is a ‘descent’ stage all the way to Villargaudin. Your day begins crossing the Alpine pastures. On your way to the Lauze pass, you’ll stare in wonder at the mountain chalets which have been listed as picturesque monuments of Hautes-Alpes. You'll then walk along a beautiful balcony path offering breathtaking views of the Guil valley. We recommend you visit the little hamlet of Villargaudin and its furnaces, fountain and chapel. For the night, head for the old Fruitière (dairy) where milk used to be turned into butter and cheese.
For further information
la Fruitière

see the map
This third stage takes you to the eastern part of the Queyras. After crossing the Guil and visiting the small hamlet of Montbardon, known throughout the valley for its cheese, you’ll climb through a beautiful larch forest to the Prés de Fromage pass. If you’re feeling energetic enough, the Bucher summit isn’t far away... The Saint Simon chapel invites you to stop for a break. Take the time to discover this history-steeped site and to drink a little of the healing waters that flow from the nearby fountain.

Here, you can reach Molines-en-Queyras by walking down to La Rua de Molines, a lovely hamlet whose architecture is quite typical of this valley. Or you can opt for Saint-Véran, Europe’s highest village, via Lake Clos. First option: La Chalp hamlet. Second option: Saint-Véran village (an extra 200-metre elevation gain).
For further information
Chalet l'Estoilies

see the map
For this stage, we propose two variants:
' The waymarked ‘Tour de la Dent du Ratier’ trail to Ville Vieille. From La Chalp or Saint-Véran, you'll walk to the hamlet of Pierre Grosse and admire its traditional houses. Next you’ll cross the village of Molines and go down to La Rua de Molines, another traditional hamlet of this so-called Aigues valley. (If you’ve spent the night in Gaudissart, you’ll find La Rua lower down.) You’ll go down through the forest to reach Ville Vieille, a little village in the middle of the Queyras. Finally, why not visit the Maison de l’Artisanat to admire the furniture and other objects made from arolla pinewood, or to sample some of the local produce.
' The variant via the Pierre Dimanche canal to Aiguilles. From your accommodation at La Rua, La Chalp or St Véran, you’ll walk to Pierre Grosse hamlet. The Pierre Dimanche canal leads you to the hamlets of Gaudissart, then Prats-Haut. This lovely balcony path offers a superb panoramic view of the entire valley. You'll spot the famous Demoiselle Coiffée of Queyras before reaching the so-called ‘Americans’ village’ with its colonial-style houses.
For further information
La Ptite Auberge

stage 5
From Ville-Vieille or Aiguilles to Souliers

see the map
From Ville-Vieille or Aiguilles, you'll reach the hamlet of Meyriès via a lovely landscape with a Provençal feel. In June and July, you’ll probably see some milkvetch, a plant that’s endemic to this area. From this small hamlet you’ll enjoy great views of Fort Queyras, a modest bastion from the Middle Ages that was restored by a certain Vauban. On your way to Souliers, you’ll also cross Le Rouet, a hamlet where time seems to have stood still... Your day ends with a walk across the pastures of Péas before you arrive at Souliers, a tiny hamlet lost amid the mountains at the foot of Grand Rochebrune which stretches to an altitude of 3,321 metres.
For further information
Le Grand Rochebrune

stage 6
From Souliers to Arvieux

see the map
You’re already on the final stage of your journey! For a fitting end to your trip around Dent du Ratier, we suggest two different routes back to Arvieux:
' The waymarked ‘Tour de la Dent du Ratier’ trail via the Tranchet pass: From Souliers, you’ll cross the grasslands of this peaceful valley up to the Tranchet pass (2,347m), to enjoy one last panoramic view over the Queyras before going back down to the valley.
' The variant via Lake Roue: For a gentle end to your hike, this variant is an easier route. It takes you via Lake Roue, an enchantingly peaceful place with a Canadian feel. Near the lake, two panoramic viewpoints offer stunning views of the Guil valley and the Combe du Queyras. From here you have a gentle descent back to Arvieux. The end of your adventure is imminent!
For further information
La Teppio 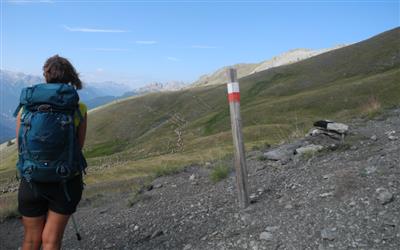